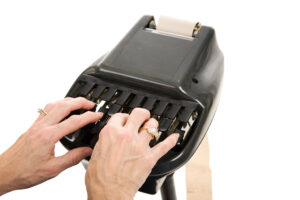 Stenotype machines—also called stenographer typewriters, stenographs, or stenography machines—are essentially portable word processors. They feature a modified, 22-button keyboard made of a hard acrylic material with no markings. Court reporters use these machines to record the spoken word in stenographic shorthand. This is much faster than typing out entire words, making it possible to transcribe speech at a rate of 200 words per minute or more.

What Does the Word “Stenography” Mean?

“Stenography” comes from the Greek “steno,” meaning narrow, and “graphy,” meaning writing. “Narrow writing” describes a system of shorthand that was once used when conversations had to be transcribed by hand. Stenotype machines are a modern, mechanized version of shorthand.

How Does a Stenotype Machine Work?

Typing in shorthand is more complicated than using a regular keyboard. Stenotype machines convey spoken syllables rather than letters. This means that the three-syllable word “calendar” only requires three strokes instead of the eight needed to spell out the word entirely.

Working a stenotype machine often involves pressing more than one key simultaneously, known as “chording” or “stroking.” This allows court reporters to type complex and varied words as quickly as possible. Thanks to this concept, it’s possible to spell out entire words in a single hand motion for incredibly fast transcription times.

To the untrained eye, stenograph transcriptions look completely garbled. The seemingly random string of letters spaced at what appear to be arbitrary intervals can be confusing. There are even multiple schools of thought on how to record various sounds, meaning one court reporter may find it difficult to read another’s notes. However, the reporter who produced the transcription in question knows exactly what it says.

The Stenograph Shorthand Machine, invented in 1877, was the first standardized typewriter used by court reporters. Pressing up to 10 keys at a time punched a paper strip, known as steno paper, with dots and dashes similar to Morse code. The device quickly evolved to include English characters instead of code by 1889. Until the early 2000s, stenotype machines printed a court reporter’s shorthand onto a roll of paper (or saved the information on a floppy disk, starting in the 1980s). The court reporter then translated the shorthand into English at a later time.

Modern technology makes it possible to translate from stenographic shorthand to English instantaneously. This occurs digitally and appears on the stenotype machine’s built-in LCD screen or a connected laptop. While not always mistake-free, this makes it possible to display real-time closed captions for the hearing-impaired. Internal storage on modern stenotype machines also allows court reporters to provide unofficial digital transcripts to attorneys and judges by the end of the day.

At Talty Court Reporters, we utilize the latest technology to deliver the very best results in your legal case. Turn to us for top-quality court reporting and transcribing services, remote depositions, video and audio conferencing, and much more. For additional information or to request a cost estimate, please contact us today.

By hiring a court reporter to transcribe your upcoming legal deposition, you have taken an important step toward creating and preserving an…